Starting to look up again

Haven’t been writing much recently. There’s a lot been happening in the world, and not much of it to do with things like design and whatever.

As I tweeted, a lot can happen in seven years.

And then, because I love a little plot twist, followed up with this comparison between the shoes:

And yeah, despite all the other shit Kanye has done over the last few years, there’s some really interesting and progressive design decisions that have gone into the latest shoe. The experimental material choices hugely reduce the environmental impact of it, manufacturing them in the USA means their sales actually create contribute back in to the economy in their primarily market (rather than just piping money out of the region) and again, doing do reduces the environmental impact of shipping both raw materials and finished product around the planet.

All of these strategies are enabled by the form of the shoe, allowing it to be moulded from a single material, and reducing the manufacturing complexity so that it can actually be produced by less… ‘advanced’ western manufacturers.

And then the way the shoes embrace that material boldness rather than trying to hide it beneath a retro aesthetic? Fuckin A, man.

Adidas (who manufacture Yeezy sneakers) have been doing other interesting work in this space, especially around the environmental consequences of sportswear consumption. One thing that makes a product hard to recycle is when it is constructed from lots of different constituent parts, made from different materials. Each part needs to be separated, before each material is recycled in a different way. Depending on how the product has been constructed, even just separating the parts from each other cleanly can be impossible.

As a direct response to this problem, a couple years ago Adidas started experimenting with running shoes where every constituent part of the shoe is constructed from the same raw plastic material. Some of the plastic is spun into yarns that can be woven as fabric, more of the plastic is moulded into foam rubber for the cushioning, and so on. Applying this material research to every part of the shoe, when it reaches the end of its lifespan it can be recycled without needing to separate it into parts.

Then, the recycled plastic from the shoe can simply be used to make more shoes. 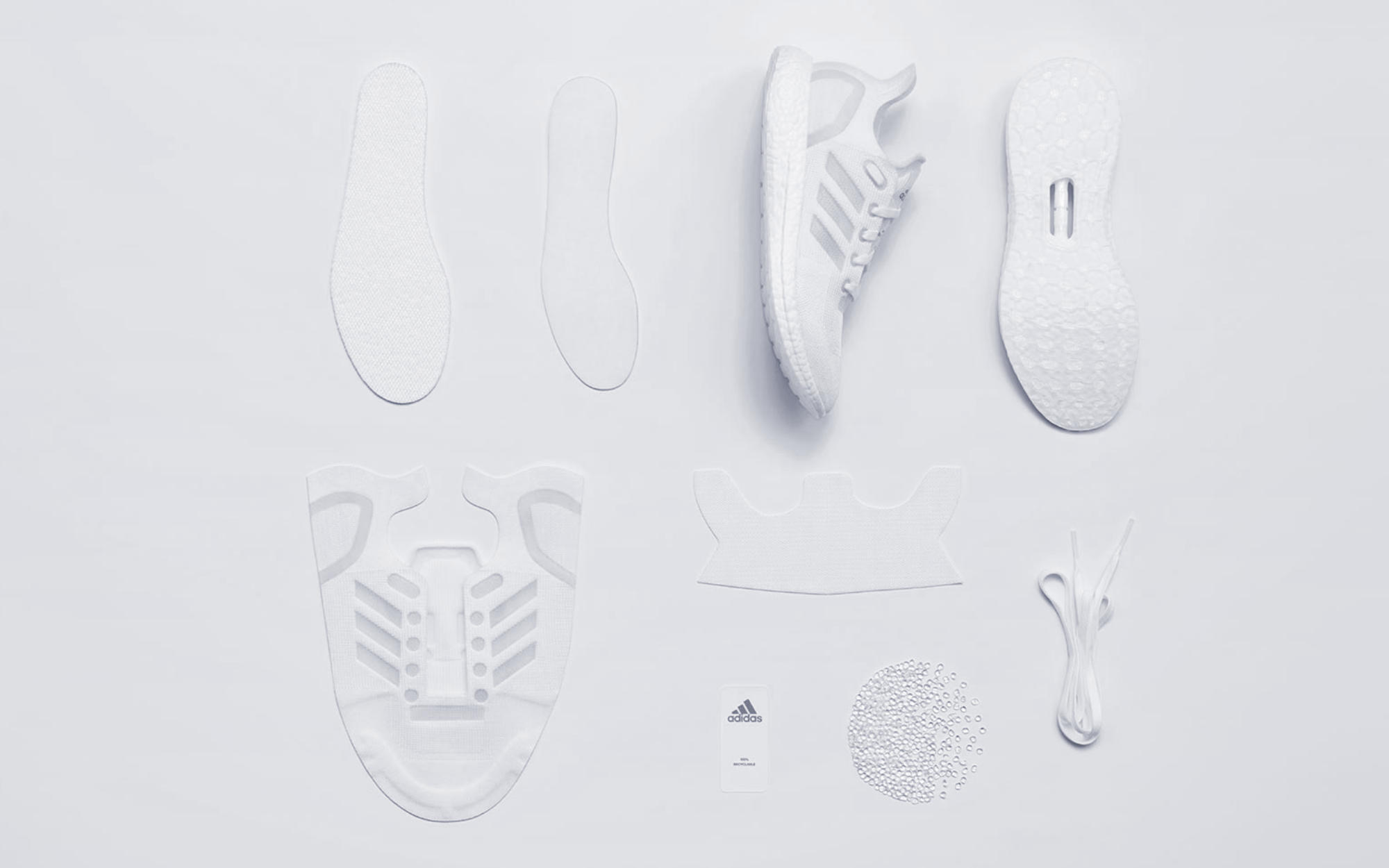 The process is known as circular production. The shoes are still at the beta stage, but Adidas sold hundreds of them, collected every pair at the end of their lifespan and succeeded in recycling them, so it sounds promising. Here’s a Wallpaper article about them from back when they were announced a couple years ago.

I guess the reason I’m writing about it now is that this week Adidas also announced a new jacket using the same technology. Highsnobiety have a great interview with Adidas Design Director Birgit Freundorfer about the processes behind making it. Obviously it’s very PR-polished, but still has plenty of interesting stuff in it. 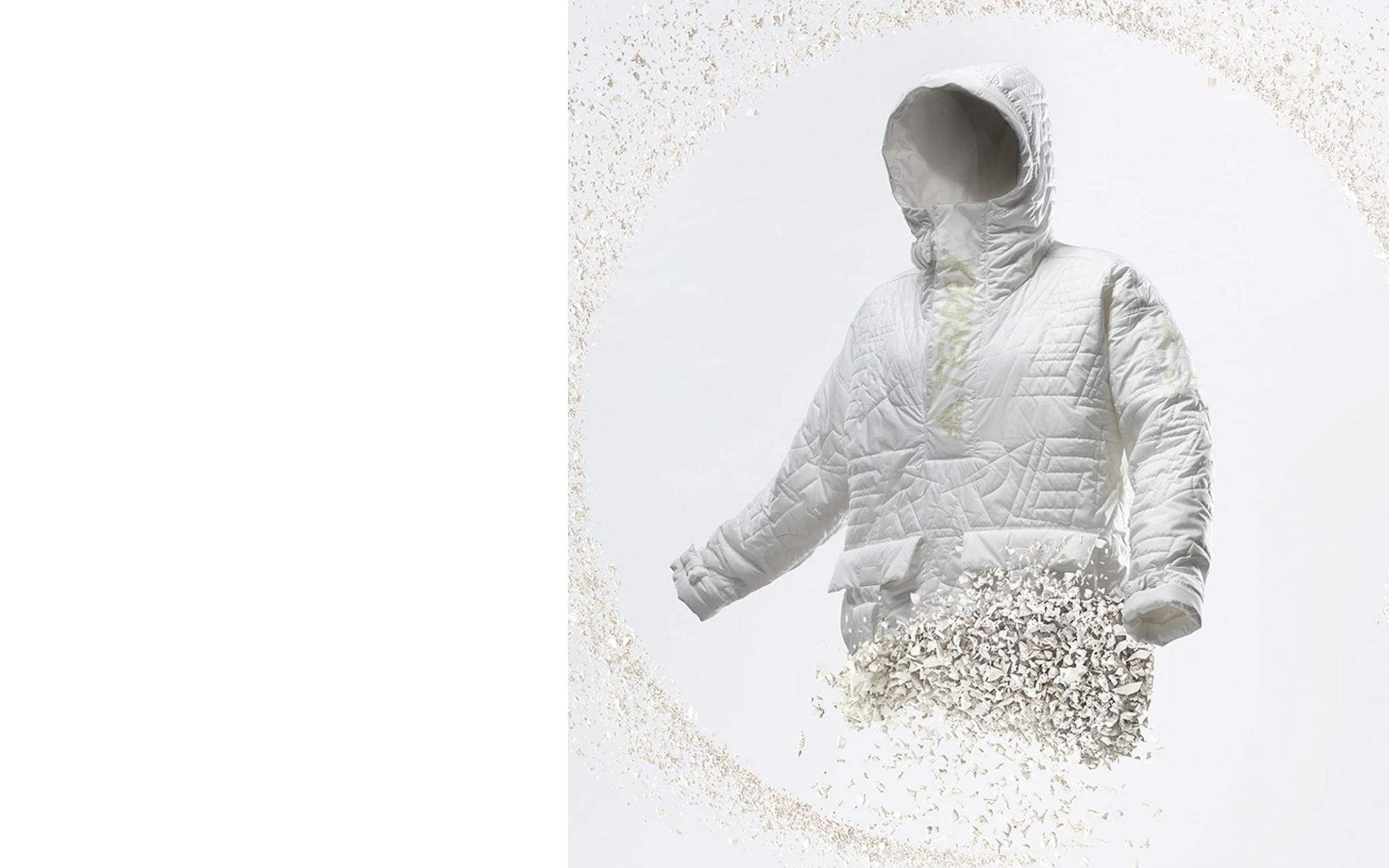 In a similar way to good service design, it’s all stuff that’s almost too obvious to even bother including in a strategy deck, but way too complicated to be achievable once you get to product implementation and marketing. It’s the result of a huge amount of technology research and iteration, tightly focused around a single, simple idea. They sell a pair of runnning shoes, and then when those shoes are worn out, they want to sell a replacement pair of running shoes. With the least possible environmental impact.

(Also, because this is the real world, let's also acknowledge for a minute quite how many constraints this simplicity puts on their marketing and design teams. Adding even the most basic new features like screenprinting a graphic onto the product, would completely destroy the product if implemented without proper consideration and research.)

Over the years I’ve posted lots of stuff on here about how hard it is to make things simple (even making it one of the UK Government Design Principles) but outside of graphic and communication design there aren’t actually that many examples of teams really following through on it at scale. Some of the Ikea and Muji furniture ranges? Love them, but it’s all mature technologies and whatever - not exactly exciting. This shit? This is the future.

nb.
If you like to keep track of these things, it’s interesting that these Adidas/Yeezy products - despite being rigidly simple from a product perspective - don’t have particularly minimal aesthetics. If anything they fit into a brutalist canon, being transparent about their construction methods and the artificiality of their materials.

nb (2).
There must be something in the air. While I was writing this, both Ella and Jen sent me new articles from relatively mainstream UK publications about the benefits of simplifying, subtracting and refining as a creative process. Love to see it! But more than anything I’ve had this passage from A. G. Cook’s tribute to Sophie floating around in my head:

Part of my education consisted of just watching her build and re-build her music. I remember hearing a version of HARD that sounded great to me, but she felt it wasn’t gelling. Instead of tweaking or ‘fixing’ it in any way, she simply started again, remaking every sound, every drum, every synth part from scratch. I thought she had lost it at first, but I realised that she saw each component with such clarity that it was simply easier for her to remake everything than to force parts that didn’t truly fit together.