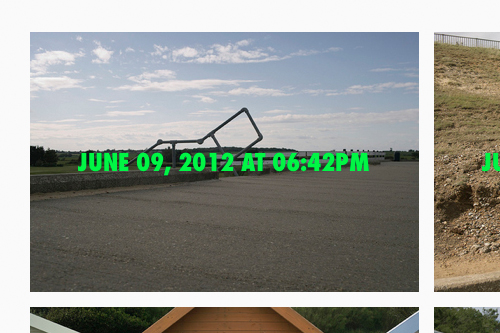 Sometimes I take straightforward documentary photographs, but at other times I’m trying to capture something less tangible. Browsing through my Flickr stream, I noticed that these behaviours roughly matched with the camera I was using to take the shot (phone, compact or SLR). My phone is always with me, the SLR is bulky and generally used for studio shots, but the compact is the one I consciously pick up when I’m planning to go somewhere a bit different, to step away from the routine. To get perspective on things.

Last weekend I threw together a basic IFTTT recipe to filter photographs from my compact camera and auto-publish them to a dedicated Tumblr, along with the exact moment they were taken. I don’t really expect it to be of interest to anyone else - it’s not filled with hard stats or location data or any of the other stuff that clever web projects supposedly need - it’s just a stream of images, with hopefully just enough context to remind me why they provoked my imagination at the time.