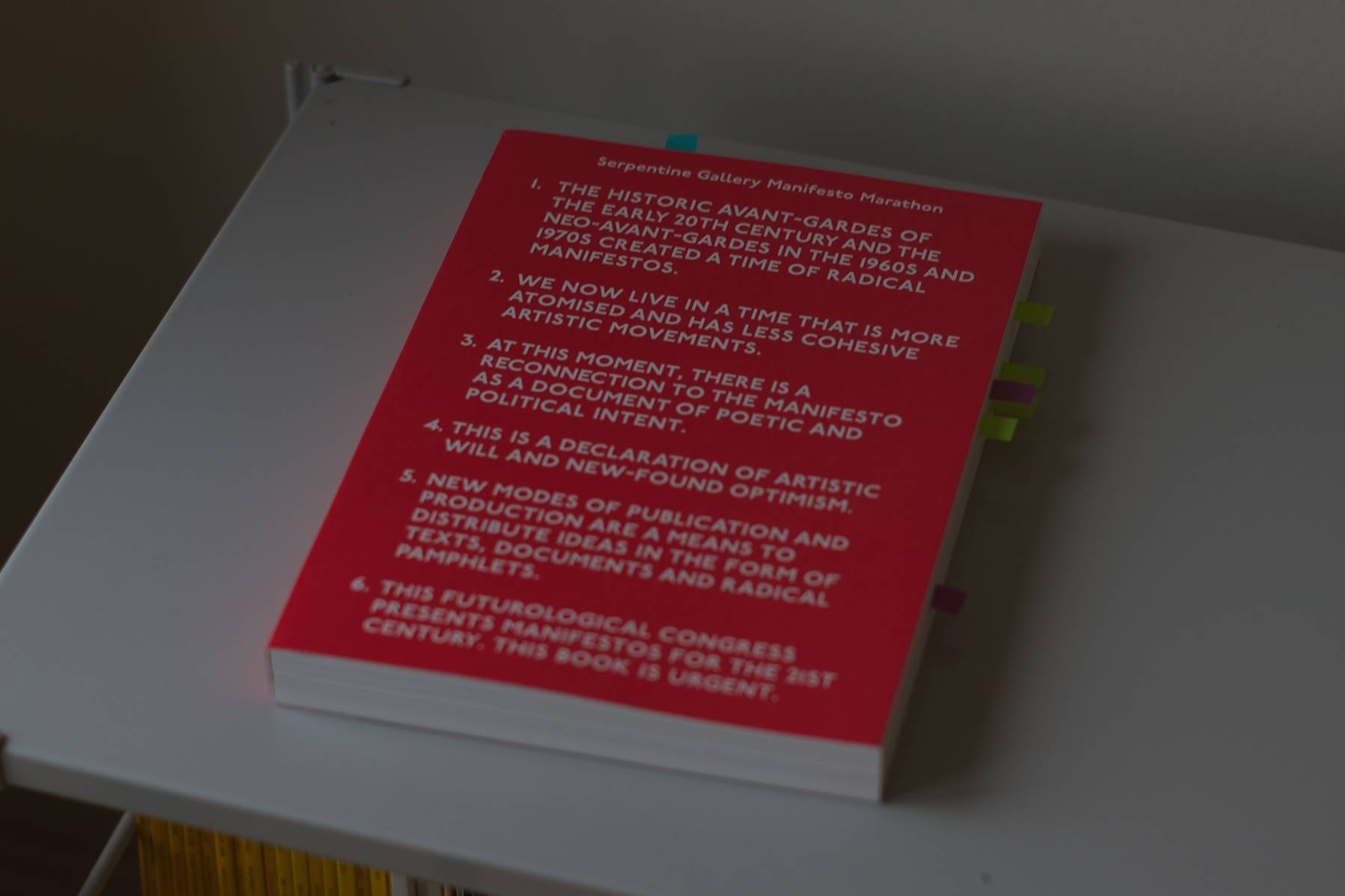 I’m quite interested in manifestos at the moment, I think it’s fascinating that people - artists and designers especially - would choose to commit (or oppose) themselves to a singular totemic idea in public. It seems so archaic and naive to me, and most of the modern contributors to the book give the impression of feeling the same way. And as with anything of this sort, reading talented people attempting to negotiate things that they’re not very comfortable with is really interesting.

Experience of life in the Soviet Union always forced me to avoid the theme 'Art of the Future' and futurological themes in general. This is probably connected with the fact that the Soviet ideology was always directed toward the future - the 'building of Communism' - and did not pay attention to the existential 'here and now'. In the Soviet Union, neither life itself nor the rights of the individual were worth anything. And one of the forms of resistance to this ideology was to ignore futurology in all its manifestations.

This is the main reason why I cannot say anything about the art of the future.

In my view, we cannot predict what the GOOD art of the future will be like, since good art, the art of the aesthetic, contacts 'here and now', is always connected with the present and is deeply personal. Everything that we can imagine in the future is BAD art, of which, however, there is always more than good art. In this respect, one can say with confidence that there will be no less bad art in the future than there is now.

The future is unclear, and I think it will remain like this. The best works of the present contain these incomprehensible points, obscure to the end, which indicate to us the unknown art of the future.

I came so close to switching out every instance of the word ‘art’ with ‘design’ when typing that out. I think it’s just as relevant to both, if not more relevant to design. User needs, etc etc.

And then there’s this:

I hate you!
I hate you!
I hate you, workers of the world!
I hate you united and I hate you ununited.
You are after money, after a class, after a sense of belonging to a mob.
You are after your fucking cars that poison my air.
Your chrome iceboxes and your televisions.
You don’t care what you make, you, workers, as long as you are paid.
You manufacture anything for anybody as long as you are paid for your ‘labor’.
You always blame the bosses, the others, the ‘Rockefellers’ for the consequences and for your own corruptions.
What an easy way out!
No, the crimes of others do not absolve your crimes!
The stupidity of others doesn’t legitimize your own stupidity!
No, you are not workers, you are pitiable slaves, collaborators and murderers.
All over the world.
In America. In Soviet Union. In Japan. In Africa.
In capitalist countries. In communist countries. In Third World countries. In all countries.
None of you care what you do. As long as you are paid.