Symbols and words say too much. They say, 'This is the land time forgot', they say, 'This is a science fiction story about a piece of a crumbling world that somehow did not crumble. It is a chunk of serenity bobbing along in a sea of unrest' It is the small tuft of green grass on the scarred and blackened battlefield. The metaphors go too far because despite what our popular imagination tells us, Detroit is, in fact, not at it's end, it is merely winding it's way through its own strange and contorted evolution. But it is true that this neighborhood has been a constant while the rest of the city surged and failed. I think there is much to investigate as to why Lafayette Park has worked when so much here has not. It seems possible to argue that its endurance is as much because of the aspects that some might consider to be faults as those that would naturally be considered successes.

Lafayette Park seethes with simple contradiction and passive challenges to the status quo. For instance, this is a city where logic would tell you that you must live with a bunkered, lock-down mentality, complete with security cameras, motion detectors and high, spiked walls. Even concertina wire doesn't seem entirely inappropriate. Yet everything about Lafayette Park is exposed, the homes have glass facades, completely revealing residents to the outsite world. Instead of fences or a gates community, we have shrubs and trees. Anyone can come and play in our parks. It is as if we have left the windows wide open and the doors unlocked. It is as if we are saying, in some quaker fashion, 'here we are, living in peace, open and trusting.' Do we endure partly because we reveal so much? Does a principle of exposed living somehow promote the longevity of a neighborhood? Do locks, alarms and high walls invite trouble? 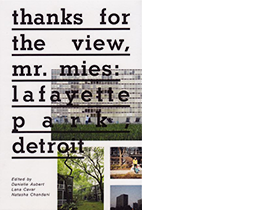 Toby Barlow, in Thanks for the view Mr Mies: Lafayette Park, Detroit

Wonderful book - so open and gentle and accepting of so many residents’ perspectives on this modernist mixed-housing project. Turns out structures like this can work.

Also, I’ve been trying to wrap my head around absurdism and metamodernism. They feel related somehow.