Kenneth Grange seems nice. Saw him talk tonight at a thing in Kensington, and despite being someone who’s been a leading figure in his industry for like fifty years he’s still got loads of interesting things to say, and in a really nice humble way too.

He had a story about his work for a Japanese client, where every person related to the project evaluates the quality of the materials and finish etc for every element of the design. From a western perspective that seems really inefficient and slow, but he credits it as the reason why Japanese goods are basically never faulty, because everyone involved is invested in the quality of the outcome.

He’s also really into the people who design the machines and processes that make the products he designs. That all designers should spend most of their time in the factory - or equivalent - which was apparently the source of a lot of jokes in the early days of Pentagram (“Kenneth’s off skiving again”), but he considers that job to be far more prestigious and important than his one of designing the produced object:

He then went on to excitedly tell us how cigar tubes are made. “How do you discover how to do that?”

It’s interesting how established older designers get into accessibility over time. I mean Grange is in his mid-80s now and still designing, so I guess it’s no surprise he’s thinking about solving the problems that he encounters on a daily basis. He mentioned getting out of the back seats of cars a couple of times, and also mentioned jackets. That jackets with more open armholes at the shoulder were far easier to get on when your mobility starts to be reduced.

And then he told the story about how one of the designers in his studio bought a proper nice coat that was also cheap, and so everyone in the studio rushed out and bought one too. But over a period of time he noticed that putting on the coat was awkward. He started noticing that almost all coats have the sleeves lined with a slippery fabric so you can easily put your arms in without your other layers getting bunched up, but this one didn’t have that lining.

What must it take to acquire an insight like that, and then to embed it in an entire industry? 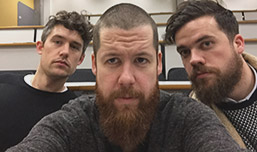 After telling interesting story after story, he finished off by announcing that he’d been having a clearout at home and had brought in a huge stack of old Pentagram material from the 70s that he didn’t want any more. We should help ourselves if we wanted any of it. Which made us regret sitting at the back of the venue.